It Was The Government That Produced COVID-19 Vaccine Success 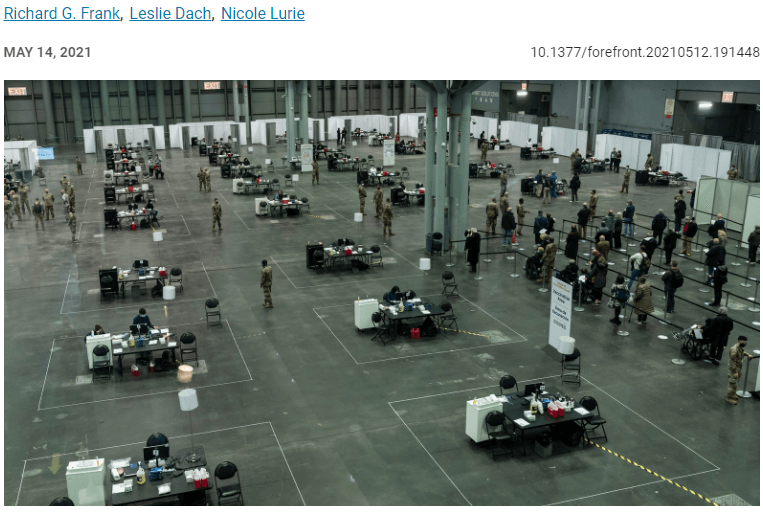 The success of the US COVID-19 vaccine effort didn’t happen on its own; it was enabled by decades of long-term investments by the federal government, followed by additional federal investment in the development of the COVID-19 vaccines themselves. The government invested extensively in every aspect of the basic science, preclinical development, and clinical trials for the vaccines; it executed procurement contracts that were critical to creating successful vaccines and ensuring they were available to the US public.

In the case of vaccines in general, the government often plays an outsized role, but in the era of COVID-19 the government’s role was even more central than usual. The government essentially removed the bulk of traditional industry risks related to vaccine development: a) scientific failures, b) failures to demonstrate safety and efficacy, c) manufacturing risks; and d) market risks related to low demand.

Since 2000, taxpayer dollars have financed the development of various vaccine platforms for HIV, pandemic flu, and other threats to public health. In response to the COVID-19 pandemic, the government leveraged investments in those platforms in three ways. First, it supported additional preclinical studies. Second, it absorbed the bulk of human testing costs and risk through a set of contracts that paid for the various phases of vaccine development and manufacturing. And third, it reduced manufacturing risk by underwriting capacity investments.

The government also largely eliminated market risks through advance purchase commitments. These contracts involved negotiation over price and quantity that ended in mutually agreeable contract terms between the government and industry.

The success of the COVID-19 vaccine development project reflects government at its best. Government created a massive mobilization of public resources to work with industry to produce products with enormous health, social, and economic benefits.

How Much Did The Government Spend To Promote The Development Of COVID-19 Vaccines?

Estimates of direct public spending on the development and manufacturing of COVID-19 vaccines vary considerably based on the range of sources examined and the timing of data collection. Recent estimates from the Congressional Research Service, the Government Accountability Office, and Chad Brown and Thomas Bollyky along with data on the GHIAA.org and Devex websites provide government spending estimates of between $18 billion and $23 billion. Most recently the Congressional Budget Office estimated that the Biomedical Research and Development Authority (BARDA) alone has spent $19.3 billion on COVID-19 vaccine development. In addition, Lisa Cornish projected $39.5 billion in US spending.

These funds, which have attenuated industry risk in developing COVID-19 vaccines, are on top of years of government-funded vaccine research that set the platforms for the current successes.

Jeffrey Harris recently reported that between 2000 and 2019, $15.3 billion was spent on HIV vaccine research. Eighty percent of this was paid for by the federal government, an additional 11 percent by philanthropy. Moreover, Harris concluded that today’s vaccine successes are descendants of the HIV research program.

Likewise, BARDA has for years invested in the messenger RNA (or mRNA) platform for vaccine development, the technology used in the Pfizer and Moderna COVID-19 vaccines. Since 2006, Congress has appropriated hundreds of millions of dollars that BARDA used to develop the scientific infrastructure to produce vaccines in response to the threat of pandemic flu. Thus, the basic research undergirding the COVID-19 vaccines was largely publicly supported.

Recent estimates indicate that the government spent more than $900 million dollars supporting non-clinical studies and research to accelerate movement of candidate vaccines into clinical trials at companies such as Johnson and Johnson, Sanofi, Merck, and Moderna.

Johnson and Johnson, Moderna, Sanofi, and AstraZeneca together are estimated to have received more than $2.7 billion from the federal government to cover expenses related to human trials. The bulk of money was directed at Phase III trials, which compare new treatments against standard care and where most human test costs are incurred.

The US government made extensive use of advance purchase commitment contracts to assure pharmaceutical manufacturers that there would be sufficient demand for their products to justify taking risks and devoting firm resources to the vaccine effort. To illustrate the magnitude of these contracts, public sources indicate that Johnson and Johnson had a $1 billion contract for 100 million doses of their vaccine. Moderna had contracts totaling $4.95 billion to produce 300 million doses. Pfizer, a firm that claims to not have received funding from the government, had advance purchase contracts totaling $5.97 billion for 300 million doses.

The pharmaceutical industry should be recognized for its dedication and commitment to the development of the COVID-19 vaccines. However, the successful science and development process behind these vaccines is due in large measure to federally supported research and to taxpayer investment in clinical trials, vaccine manufacturing, and large-scale procurement. The government cushioned the pharmaceutical industry from much of the risks associated with vaccine development.

The federal government’s decision to invest in multiple vaccine efforts, even though some of those programs were terminated, also served to reduce the risks to the US people that no effective vaccine would emerge from the effort. Given the huge benefits from vaccine success this was money well spent.