He led the island’s transition away from a police state to one of Asia’s most vibrant democracies. His insistence that Taiwan be treated as a sovereign state angered Beijing, which considers it part of its territory. 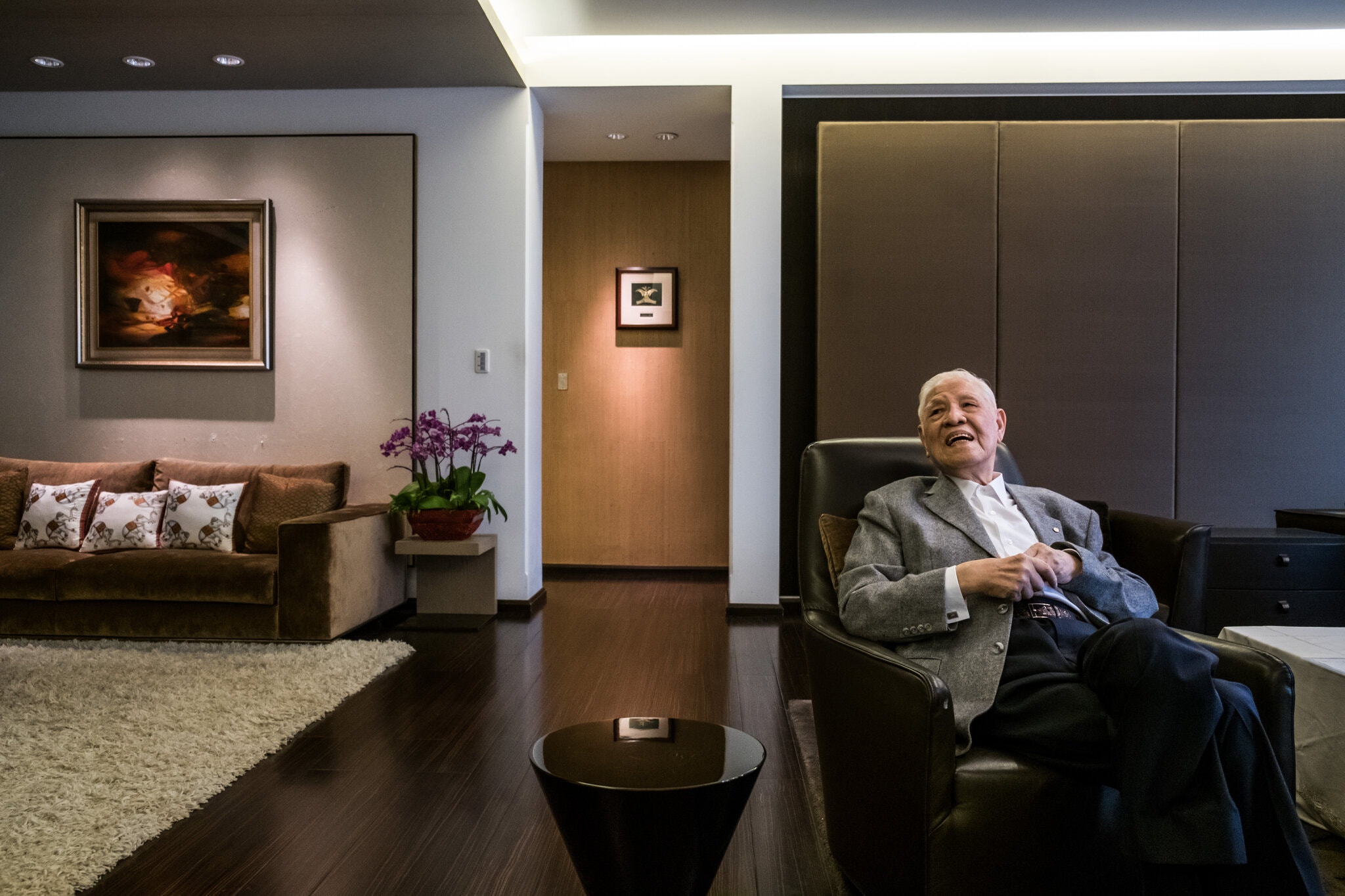 Lee Teng-hui in Taipei in 2018. He succeeded Chiang Ching-kuo to become the first native president of Taiwan.Credit…Lam Yik Fei for The New York Times

Lee Teng-hui, who as president of Taiwan led its transformation from an island in the grip of authoritarian rule to one of Asia’s most vibrant and prosperous democracies, died on Thursday in Taipei, the capital. He was 97.

The office of Taiwan’s president announced the death, at Taipei Veterans Hospital. News reports said the cause was septic shock and multiple organ failure.

Mr. Lee’s insistence that Taiwan be treated as a sovereign state angered the Chinese government in Beijing, which considered Taiwan part of its territory and pushed for its unification with the mainland under Communist rule. His stance posed a political quandary for the United States as it sought to improve relations with Beijing while dissuading it from taking military action to press its claims over the island.

As president from 1988 to 2000, Mr. Lee never backed down from disputes with the mainland. In 2018 he was calling for a referendum on declaring the island’sname to beTaiwan, not the Republic of China, as it is formally known — a move that would have paved the way for sovereignty, but was not made.

“China’s goal regarding Taiwan has never changed,” he said in a rare interview with The New York Times, amid efforts by the Chinese government to further isolate the island from the international community. “That goal is to swallow up Taiwan’s sovereignty, exterminate Taiwanese democracy and achieve ultimate unification.”

The office of Taiwan’s current president, Tsai Ing-wen, praised Mr. Lee’s achievements. “The president believes that former President Lee’s contribution to Taiwan’s democratic journey is irreplaceable and his death is a great loss to the country,” it said.

Mr. Lee entered Taiwan’s politics during an era of dictatorship under the Nationalist Party regimes of Chiang Kai-shek and, when he died in 1975, his son Chiang Ching-kuo. The Nationalists ruled with an iron fist. Their brutality reached a peak with the 1947 massacre of up to 28,000 Taiwanese by Chiang Kai-shek’s troops after street protests, in what became known as the February 28 incident. Two years later, the Nationalists imposed martial law, which was lifted only in 1987.

Born in Taiwan, Mr. Lee joined the Nationalist Party, known as the Kuomintang or KMT, in 1971, and became an agricultural minister. He later served as mayor of Taipei, the capital, and as the governor of Taiwan Province before being tapped as vice president in 1984.

When Chiang Ching-kuo died of a heart attack in 1988, Mr. Lee succeeded him, becoming the first native Taiwanese president. 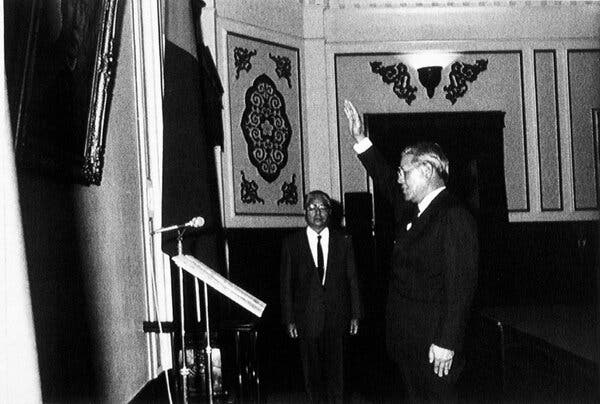 Mr. Lee being sworn in as president in January 1988, following the death of President Chiang Ching-kuo.Credit…Associated Press

Mr. Lee dismantled the dictatorship and worked to end the animosity between those born on the mainland and the native Taiwanese. He pushed the concept of “New Taiwanese,” a term suggesting that the islanders — no matter their backgrounds — were forging a new, common identity based on a democratic political system and growing prosperity.

Such an episode occurred after a 1995 trip by Mr. Lee to the United States, ostensibly to visit Cornell University, his alma mater. China accused the United States and Taiwan of colluding to raise the island’s diplomatic status. In a demonstration of Beijing’s ire, Chinese military forces fired test missiles into the Taiwan Strait, which separates the island from the mainland. Washington countered by sending warships off the Taiwan coast. The affair strained relations between Washington and Beijing for many months.

In a 1999 interview on German television, Mr. Lee again infuriated Beijing by suggesting that relations between Taiwan and China should be conducted on a “special state-to-state” basis. That provoked tirades in the official Chinese media, with the People’s Liberation Army Daily denouncing Mr. Lee as “the No. 1 scum in the nation” and the Xinhua News Agency calling him a “deformed test-tube baby cultivated in the political laboratory of hostile anti-China forces.”

But such attacks only made Mr. Lee more popular in Taiwan. A tall, silver-haired, tough-minded campaigner with a dazzling smile, he used his considerable charisma to rally support. He spoke the slang of the ports and factories, rode bullhorn trucks with local candidates and set off firecrackers to please the deities of local temples.

“The people like Lee Teng-hui,” Chen Shui-bian, then the mayor of Taipei, said in 1996, “because he stands up for them in the face of China’s dictators.”

Lee Teng-hui was born on Jan. 15, 1923, in Sanzhi, a rural village on the outskirts of Taipei. His father was a police detective in the employ of the Japanese authorities that ruled Taiwan as a colony between 1895 and 1945. Mr. Lee studied agronomy in Japan at the Kyoto Imperial University and served as a second lieutenant in the Imperial Japanese Army during World War II, but he never saw action.

After the war, he returned to Taiwan and secretly joined the Communist Party of China while completing his undergraduate work at the National Taiwan University. “I read everything I could get my hands on by Karl Marx and Friedrich Engels,” he wrote in his 1999 memoirs, “The Road to Democracy.” In 1947, he joined protests in the February 28 incident. But Mr. Lee soon renounced Marxism and joined the KMT, which destroyed his Communist Party records when he became politically prominent.

In 1949, he married Tseng Wen-fui, the daughter of a prosperous landholding family, and both became devoted Presbyterians. They had two daughters, Anna and Annie; their only son, Hsien-wen, died of cancer. In addition to his wifeand daughters, he is survived by a granddaughter, Lee Kun-yi, and a grandson, Lai Wei-lun.

Taiwan’s existence as a separate political entity came about after the civil war in China gave power to Mao’s Communists, forcing the defeated government of Chiang to flee to the island, some 100 miles off the mainland coast, in 1949.

For the next 30 years, Taiwan, with American support, maintained the fiction that it was the seat in exile of China’s legitimate government. In 1979, Washington finally recognized the Communist government in Beijing and severed its formal diplomatic relations with Taiwan. But it continued to guarantee Taiwan’s security against a mainland invasion and backed long-term negotiations between both sides aimed at their peaceful reunification.

Mr. Lee cultivated strong ties with the United States during two long academic stays, receiving a master’s degree in agricultural economics from Iowa State University in 1953 and earning his Ph.D. from Cornell in 1968. In between, he taught in Taiwanese universities, gaining recognition as an agricultural economics scholar and attracting the attention of Chiang Ching-kuo, then a deputy prime minister under his father. On the younger Chiang’s recommendation, Mr. Lee was appointed minister without portfolio, and distinguished himself by promoting programs that raised farm incomes and health standards.

In 1978, with Chiang Ching-kuo installed as president, Mr. Lee was appointed mayor of Taipei and modernized the capital’s road and sewer systems. As governor of Taiwan Province between 1981 and 1984, he was credited with pushing an agrarian reform that helped achieve a balanced growth between urban and rural areas — still a hallmark of Taiwan.

In 1984, Mr. Chiang selected Mr. Lee as his vice president. It was a dramatic departure from the usual practice of appointing only mainland Chinese to the top government posts, and his selection was viewed as a gesture toward the native Taiwanese, who were politically powerless despite accounting for 85 percent of the population.

When Mr. Lee became president in 1988, he moved decisively to break with the Chiang family’s autocratic system. He publicly deplored the massacres of the February 28 incident. In 1991, he ended state of emergency measures that had been enforced for decades. His government allowed citizens to send mail to and visit relatives on the mainland, dropped bans on street demonstrations, eased press restrictions and promoted a multiparty system.

He also decreed open elections for the National Assembly. The KMT easily retained control of the legislature, but more than three-fourths of the seats went to Taiwanese natives. “What had been a tight police state under Chiang Kai-shek and his son Chiang Ching-kuo is now the most democratic society in the Chinese-speaking world,” The Times declared in a 1992 editorial. 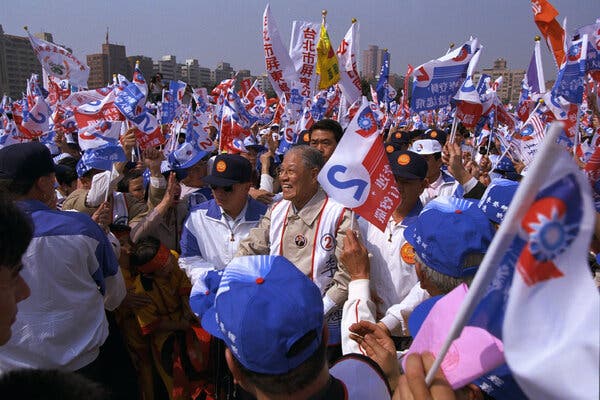 In 1996, Mr. Lee was re-elected in Taiwan’s first open presidential contest. In an attempt to open a dialogue with Beijing, he advocated a policy of “one China, two equal governments” but insisted that Taiwan would rejoin the mainland only if China became a democratic, capitalist society. In the meantime, he again called for “state-to-state” relations between Taipei and Beijing, a policy that the mainland emphatically rejected. Instead, Chinese officials pushed to convince other countries to cut all ties with Taiwan, asserting that any improvement in relations would only come after Mr. Lee’s retirement.

But Mr. Lee was succeeded in 2000 by Chen Shui-bian, the Democratic Progressive Party candidate whose election marked the end of KMT rule. In his two terms, Mr. Chen presided over a huge expansion of Taiwan’s trade and investment in China — a process already underway during the Lee presidency. But like his predecessor, Mr. Chen frustrated Beijing’s attempts to get Taipei to acknowledge the mainland’s sovereignty and embrace a timetable for unification.

In 2018, Mr. Lee came out of retirement to help create the Formosa Alliance, a new party calling for the formal independence of Taiwan from China. But the party did not go ahead with a promised referendum on independence.

Late in life, Mr. Lee suffered the ignominy of corruption charges. In June 2011, he was indicted, along with a financier, Liu Tai-ying, on charges of embezzling almost $8 million in public funds during his presidency. Mr. Lee was acquitted in 2013.

Mr. Lee took solace in proclaiming that he helped his island of 23 million inhabitants to serve as a beacon for the 1.4 billion people on the mainland. Or as he wrote in his memoirs, “We have developed the economy and have embraced democracy, becoming the model for a future reunified China.” 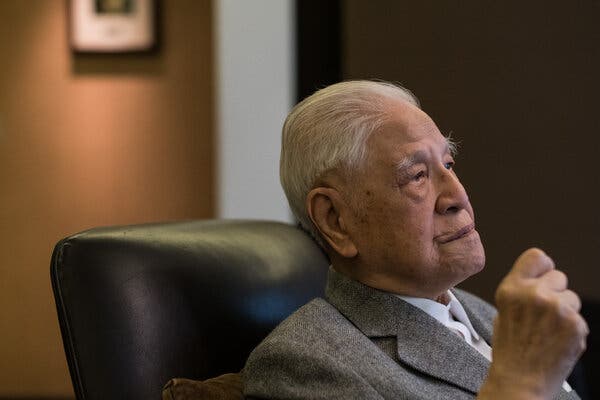