Taiwan No. 1 for healthcare: poll 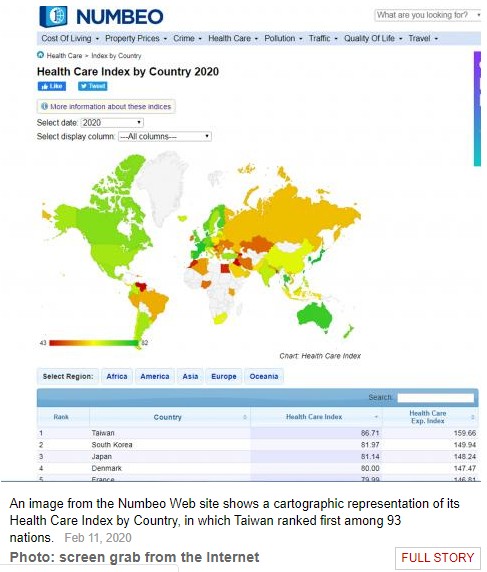 Taiwan’s healthcare system has been ranked No. 1 in the world for a second year, according to an online survey.

With a score of 86.71 out of 100, Taiwan ranked first among 93 countries, the Health Care Index by Country released by online database Numbeo showed.

South Korea and Japan were closely behind Taiwan, with 81.97 and 81.14 points respectively.

Denmark, France, Spain, Austria, Thailand, Australia and Finland followed, rounding out the top 10. China ranked No. 47 with a score of 64.48.

Venezuela finished at the bottom of the list with a score of 39.66.

Taiwan also ranked first last year, with a score of 86.22.

The country ranked second behind South Korea in the 2018 survey, which was first conducted in 2012.

The results are based on surveys from visitors to its Web site who were asked to score overall quality of healthcare in their countries, Numbeo said.

The magazine said its index measured the overall quality of healthcare systems, including infrastructure, competencies of professionals, and cost and availability of quality medicine.